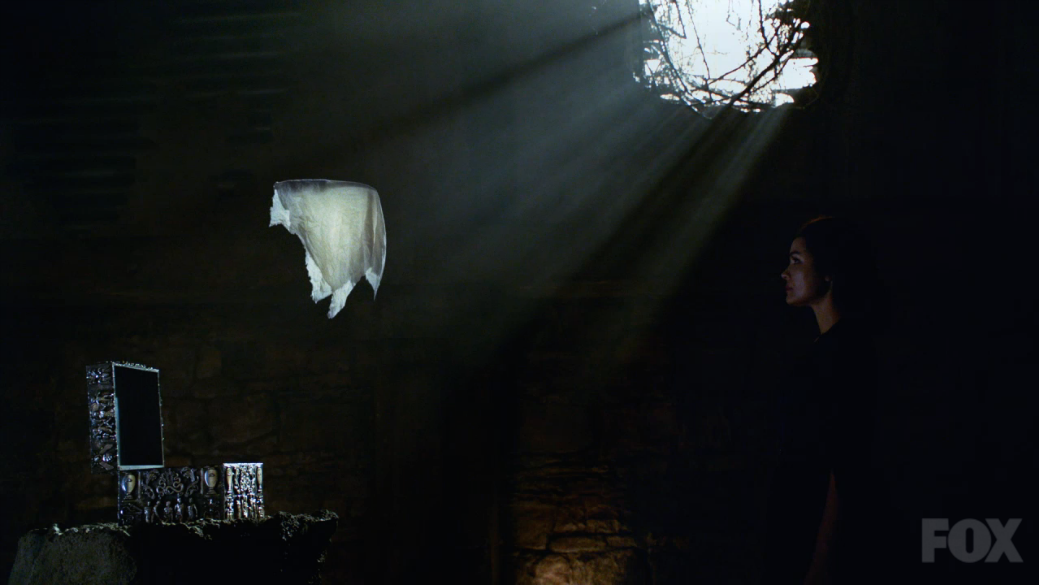 So it seems obvious by now that Sleepy Hollow’s weekly monster is taking a back seat to the other story lines. I guess that makes sense. We have Jenny and Joe on a mission to retrieve The Shard of Anubis. (a bit confused there though. I thought a “shard” would be a broken and pointy thing. A shard is defined as “a piece of broken ceramic, metal, glass, or rock, typically having sharp edges.” This thing Jenny has looks like a ball of black play-doh that someone stuck their thumb in a lot.) This bit is great fun. Jenny tracks down the guy who took the shard in the last episode, and shows up to take back her artifact at a no-tell motel. Their. Jenny and Joe get fooled by a new young lady that seems to be following Jenny’s footsteps. Jenny finds her and in a great scene at a restaurant confronts her about her past and her present employers. All of this after Jenny had already retrieved the shard showing that Jenny was very interested in who this new woman was.

We also have the Pandora arc. What is with the evil tree, and the black roses growing on the tree? What is her overall plan? At the moment she is starting to remind me of Dr Claw in the Inspector gadget Cartoons; always someplace watching her plan unfurl. Although this week, she was a bit more active in the set up, and made a good “wrap up” appearance. We do learn that she is specifically targeting our witnesses, and that she knows a lot more about them then they are comfortable with. 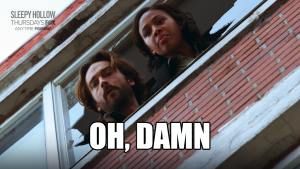 In this weeks episode, Pandora’s Box coughs up an Byzantium Dagger that turns whoever wields it into a Ripper (like “Jack the Ripper”). We discover this because one of the previous “Ripper” incarnations killed a schoolmate of Ichabods, and he recognizes the Modus Operandi. Ichabod has also been studying the Whitechapel murders so he is all set up for this.

The witnesses figure out who the perp is, and get there to confront him in time to see the blade has fused itself to his arm. Amy tries to shoot him, but bullets don’t seem to work (Damn… Oh, Damn).

Our heroes learn that all the previous “Ripper” incidents ended with a disease outbreak (this would have been a great place to imply that one of the Whitechapel prostitutes gave the dagger an STD… but hey, missed opportunity). Abbie and Ichabod get some Malaria blood, and head off to find the killer again.

With 2 shots of infected blood, we quickly see that the dagger is adapt at protecting itself, and shooting the perp isn’t going to work. Ichabod, once again, decides to risk himself for the good of all, and jabs himself with the infection, then lets himself get stabbed. Everything work as planned, and as Ichabod and Abbie await an ambulance, Pandora stops by to taunt Abbie.

It seems Pandora expected the team to defeat her “Ripper”. Her plan wasn’t to win anyway. It was something else. Maybe she is feading off the witnesses fear. Maybe Abbies fear of loosing Ichabod and having to face the tribulations alone was what she was really after all along.

The overall season arc seems to be what is taking precedent in this season of Sleepy Hollow and Blood and Fear is an episode where that is obvious. This isn’t “Friday the 13th: the Series” type writing where each individual episode can stand on it’s own. You need to commit to the whole season to enjoy it. Otherwise it just seems like some good characters and performances mixed with a goofy storyline.

What did you think? Let us know in the comments below!