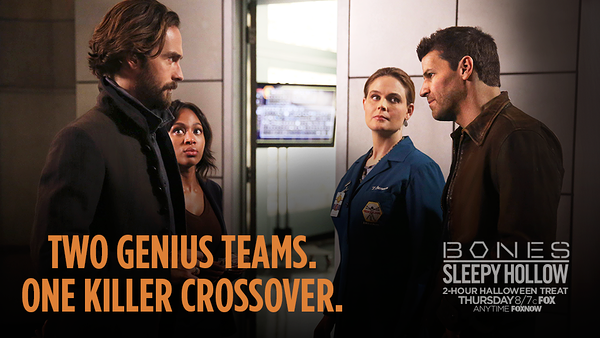 Bones: The Resurrection in the Remains

I don’t usually watch Bones. I have seen a few episodes over their 11 season run, and it seemed like an entertaining show. However, I am not a big procedural show fan. However, I decided to watch this episode since it is the first half of the crossover. 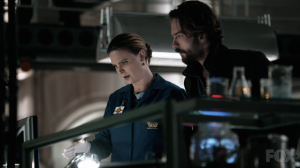 The episode concerns a med student whose corpse is found underneath an old church were some kids are getting ready to have a Halloween party. Next to the deceased med student is a sealed coffin with the headless remains of a revolutionary war era British General. This, of course, is the catalyst to bring Ichabod and Abbie into the world of Bones. The supernatural element prevalent in Sleepy Hollow was, for the most part, left out of the Bones half of this crossover event. Instead, the story relied on the dead med students obsession with the supernatural, and her after hour attempts to die, and be revived (ala Flatliners). To do so, she consults an ancient witchcraft book, and from there, gets the idea that she needs the British generals head to aid in her experiments.

Of course, Ichabod is good for deciphering ancient texts, and throwing out historically relevant clues from time to time, but for the most part, the writers of Bones seemed to have turned Ichabod into a bit more comic relief in this episode then he usually plays (and he usually does play the comic relief, so…)

Abbie seems to do most of her work in this episode off screen, and then reports back to Booth. Although we do get an interesting bit of backstory between the two of them when Booth reveals that he new August Corbin, and that Corbin spoke to him of Abbie.

In the end, the team solves the murder, and Ichabod produces documentation to get the remains of the British General sent over to Sleepy Hollow. Overall, this episode of Bones was probably a fun episode for Bones fans. For me, it was just a long introduction to the Sleepy Hollow episode. 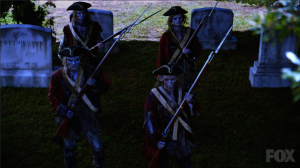 The Sleepy Hollow Episode of this crossover event wastes no time bringing the supernatural back into our story line. The episode opens with the British General Howe’s remains being transported to Sleepy Hollow when Pandora arrives (dressed up like a Sith Lord for Halloween). She does a Force Choke on the driver, the reanimates General Howe and instructs him to raise his dead soldiers and seek revenge on Ichabod Crane.

Abbie and Ichabod run into General Howe and his platoon of undead redcoats in a mausoleum. The pair are saved by the light of day, and then have to figure out how to defeat this undead menace by the next night.

This leads to calling in a favor with the Bones team, and soon enough Ichabod, Abbie, Booth and Brennan are finding Howes tomb underneath the US Capital. They discover a booby trap that utilizes Greek Fire, and surmise that Greek Fire can kill the undead army. (Although Brennan calls the Greek Fire Naplam judgeing by her ability to smell the chemicals in it. This makes one wonder why Napalm isn’t used to try to defeat the undead first…).

Somehow, our team figures out how to create Greek Fire of their own, and draws the undead legion into the sewers to help contain the Greek Fire they plan on unleashing on them (using Ichabod as bait). The plan works, and humanity (and Sleepy Hollow) is safe again… at least for another week. 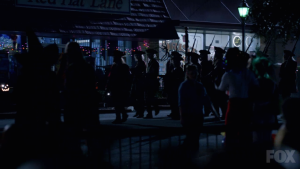 Tell us what you think. Did the crossover meet your expectations? Are you more of a Sleepy Hollow fan, or a Bones fan, and how did that effect your experience with the cross