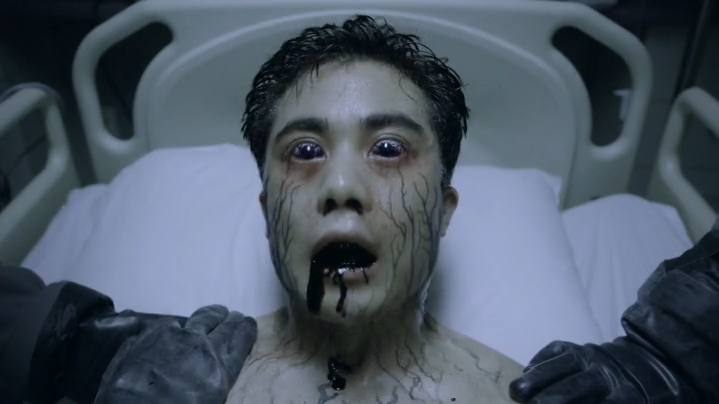 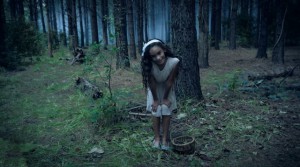 Young girl, in a forest with a basket in hand, sort of giving you a fairytale vibe. A little boy appears in the woods, dressed as a prince and the they play catch-me-if-you-can for a while. Just as I was about to forget that I was watching Sleepy Hollow, the little girl disappears and the boy is chased out of the woods by a fearsome horseman.

Crane is now taking over Corbin’s cabin. Just as he’s settling in, Abbie gets called in for an unconscious boy had been found form the roadside. As Abbie and Ichabod head over there, they figure out that the little boy had a condition, a blackening of veins to be precise. Ichabod also manages to point out the ancient trend of clothing on the boy. Before the boy is dispatched to the hospital, he utters some words in a strange language (apparently, in Middle English) which Ichabod later translates as “evil girl”. Ichabod had learned the middle age English form Oxford and of course tending to be a potential asset for this case which causes some oozing jealousy in Abbie’s ex, Luke Morales. 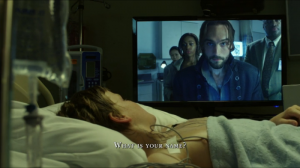 Ichabod is at the hospital, trying to communicate with our John Doe in hand. The condition of the boy doesn’t look too great, he seems ill and wretched. Amongst all that, he manages to exchange a few words with Ichabod, in middle age English. The language does seem a lot more familiar this time, as they use words like thy, dwell, pardon and I traced French, like, ‘grand merci’. The boy gave little information including his name, the fact that he was not supposed to leave his home and that he shouldn’t have followed the evil girl; he also said that his home was in Roanoke. While the police are looking for his home in Virginia, Ichabod has some other place in mind. He fills Abbie in on about one lost colony which was the first colony in 1587, North Carolina. 3 years later, all the people of the colony had apparently disappeared and it came to be known as the lost colony and Ichabod proposes that they might have relocated to Sleepy Hollow based on the antiquated look of the little boy and the Middle English he spoke. 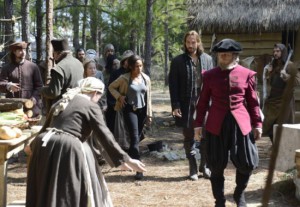 The disease the little boy, Thomas Grey, had been infected with, has turned out to be contagious. The EMT, who got in contact with the boy, had the same blackening of veins, only an intensified version. In the meanwhile, the best Abbie and Ichabod can do is solve the mystery of where the boy comes from. So they head to the woods, in search of the colony. Ichabod shows off some hunting skills and tracks the path that Thomas had taken. Ichabod shows some more cleverness in figuring out some signs on trees which marked a hidden crossing which helped them cross a lake. 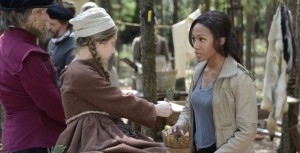 The people of the colony greet them as if they were expected. Ichabod questions why the people suddenly vanished and one of them answers that the land of Roanoke was cursed and haunted by the horseman of pestilence which caused all of them to be infected. The ghost of Virginia Dare, the granddaughter to the leader of Roanoke and the first one to lose her life in this illness, led the way to the safety of the colony. The disease could not affect the people as long as they stayed in that place but as Thomas got out, he took the plague and it started to spread among other people and now the only possible solution was to return him back to his colony. And if they failed, along with the persistence of the disease, another horseman of the apocalypse shall arrive. 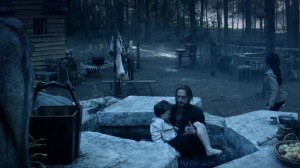 The number of people getting infected is increasing. And sadly, Ichabod is one of them. So he is injected and as he goes unconscious, he enters an alternate universe where he is reunited with Katrina. She tells him that he being there meant that he was either dead or nearing so. She also says that she is trapped in purgatory and held captive by Moloch. Katrina tries to tell Ichabod why she is there but before she can, he transfers to his body. In the meantime, Abbie figures that there is something in the water in the colony which keeps them from getting severely infected by the disease and with heap from Irving; she manages to get Ichabod and Thomas to the colony. Ichabod insists that Abbie should go to Roanoke to get help but she replies that all the trees look the same to her and injects him with adrenaline. The horseman is back and chasing them as Ichabod rushes into the well full of water with Thomas in his arms and soon later the horseman along with the whole colony vanishes right in front of our eyes. Ichabod deduces that Thomas and all his people had been dead along as after their disappearance, there was no sign of them ever being there in the first place. Thankfully, along with Ichabod and Thomas, all the other people infected by the same disease, recovered. So well, the day has been saved, for now.