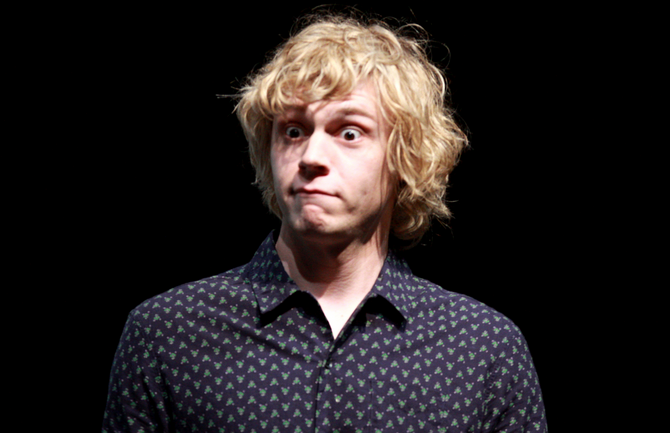 Evan Peters may have played a dumb Frankenstein monster-like frat boy on American Horror Story: Coven, but in real life he’s the luckiest man alive. First he’s playing Quicksilver in X-Men: Days of Future Past, and 2nd, he’s engaged to Emma Roberts. The question is, is he lucky enough to have a spot on the next season of AHS? According to Peters, nothing has been decided yet. His performance on Coven was okay and he didn’t really stand out. Although I’d say that there is a very high chance that Ryan Murphy will tap his talents again next season as the Glee co-creator has the habit of using the same talents over and over again.

On acting at a young age and not having (or needing) to have a job stocking shelves or working at a register:

“No, no. I started acting when I was 15, in commercials and guest roles. I was definitely a working actor, so I was thankful for that. But I never had to work at a store, although I would have liked to.”

“Honestly. I tried to — I wanted to work at Blockbuster.” Said Peters.

Growing up in the age of the internet, would you know the appeal of going to a video store and renting out a movie instead of streaming a flick online?

“Yeah. Since we’re taking about Blockbuster, there’s something that’s really endearing and fun and nice about it: You get out of the house and it’s an adventure. You go pick a movie and maybe even pick out a little candy or popcorn. It’s definitely easier to watch movies online, but it’s taken out some of the adventure and fun of it.”

About blowing up a sex doll that made noises, did you know such a toy exists before doing the movie?

“No, I didn’t really know that either. It was pretty interesting playing around with that doll — hilarious, actually. Emma and I were just dying laughing; we were cracking up at the ridiculousness of the doll. Honestly, when you look at the thing in real life, it’s pretty cheap-looking and I don’t know who would want to use that particular doll. It just doesn’t seem like it’s usable, for lack of a better word.”

Emma Roberts told Chelsea Handler that she had a crush on you while doing the movie but you didn’t talk to her.

“Well, I had a crush on her, too, and I didn’t really know how to approach her or talk to her or any of that stuff. And at the time I was a more introverted actor, trying to kind of stay into it and stay focused and not talk too much. But, yeah, I tried to talk to her a few times and, I don’t know, I kept saying the wrong thing. I was really kind of awkward and stupid and like, Oh God, this is just not working out well. I’m just going to shut up and not talk.”

On working with the next season of AHS?