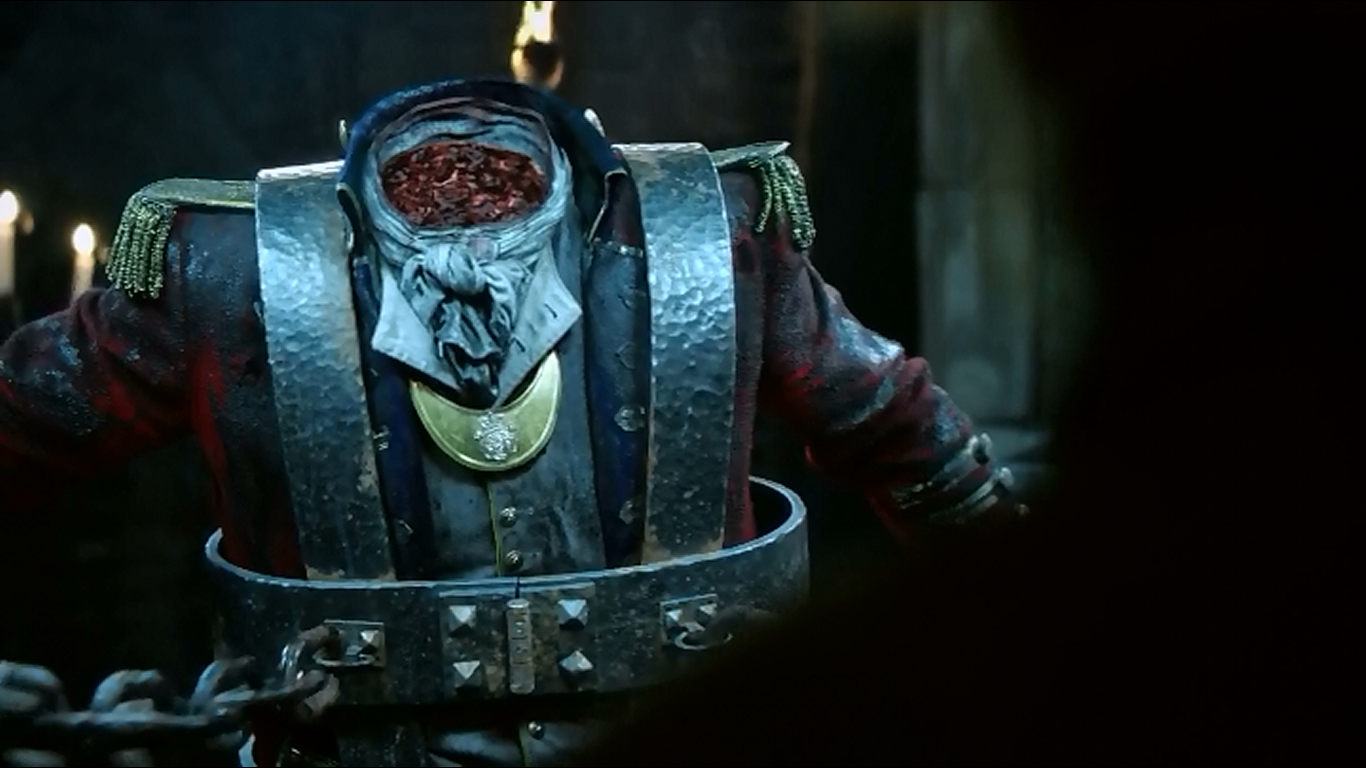 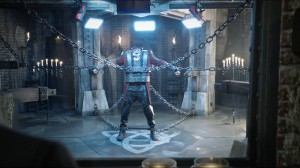 The impossible was accomplished by the dynamic witness duo. They captured the invincible beast, the headless horseman, in the prior episode. This time the duo had support and that too from the skeptic, turned believer, Captain Irving. Abbie teaches Ichabod the magical gesture of a fist-bump in this epic moment of triumph of theirs. They kept the horseman in a cell with UV lights and hex candles to weaken the man symbolizing death. Thomas Jefferson had built the cell to hold demons as prisoners. Abbie anticipates the approach of more evil towards Sleepy Hollow. Ichabod offers to interrogate the horseman while Irving doubts the possibility of the horseman talking, provided that he is missing a head, we too have similar doubts. Abbie suggests that there was someone, another dead being, who could interact with their hostage. Irving is astonished to hear the news of Andy Brooks’ resurrection as an agent of Moloch. So, the trio now decides to get ahold of Andy Brooks and update Jenny about the current circumstances as she has finally passed out of the mental institution. 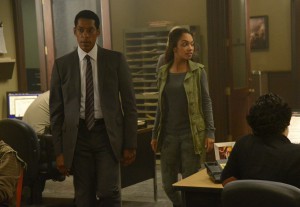 Captain Irving gets Jennifer Mills to the station and brings her up to speed on their latest ventures. Jennifer, initially in disbelieve, finally gives in and decides to work by her sister’s side and the Captain gets the credit for this one. There is a new case in hand at the Adams’ where, coincidentally, Jenny used to work. So, Irving heads to the location with Jenny and there they find the owner of the place on the ground, injured. Adams is breathing, but he is shot, however, he is more worried about the possessions of a box which Jenny declares as being empty. It apparently contained ancient relic protected by the warlocks which, as Jenny mentions, can be used to break the hex spell, similar to the ones shielding the horseman’s chamber. Irving and Jenny rush out of there, anxious and planning their next move to figure out remedies for the situation. 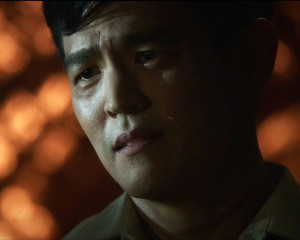 The witnesses track down Andy and Ichabod finds Egyptian symbols of communicating with the dead, which reveals that Andy was the horseman’s Necromancer, the one with the capability to communicate with the dead. Andy is apparently appointed to be the voice of the horseman. Ichabod decides to take the risk of putting Andy in the cell with the horseman to get the information they required. Andy warns Abbie that his soul belongs to the evil now and once he is possessed, he has no power over himself, so it is dangerous to put him in there with the horseman. But this is a risk the witnesses are willing to take. 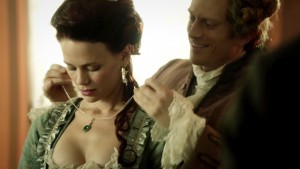 Once taken to the cell, the horseman initially seems reluctant to speak but Ichabod finds a way to get on his nerve and at one point, Andy speaks, in the voice of his master. A necklace drops on the ground out of nowhere, a necklace which once belonged to Katrina. Ichabod narrates the story behind the necklace. The story goes all the way back to the time when Katrina was engaged to Ichabod’s friend Abraham Van Brunt. 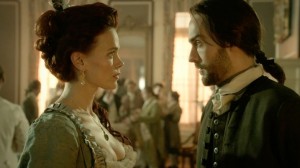 He had bought the necklace, chosen by Ichabod, for Katrina but she wasn’t in love with Abraham and thus, annulled her engagement with him. Katrina professes her love to Ichabod, who then felt torn between friendship and love. Upon listening to the story, Abbie says, “She dumped her fiancé for you. You had some game.” Ichabod replied, “I neither wanted, nor did I invite, ‘game’.” Ichabod plays shrewd and makes the horseman peevish enough to speak up. The horseman states that Ichabod did not essentially find the horseman of death on the battlefield, death, infact, found him. 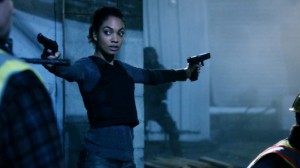 Jenny and Irving visited the Sleepy Hollow Power West Grid and captured the electrical workers (hessians) but they fail to find what they were looking for and before we know it, the power station exploded, causing the city’s lights to go out, including the UV lights of the cell keeping the horseman captive. The power was going to be out for atleast two hours, as reported by the Department of Power. This was enough time for the horseman to regain his power and also enough time for Ichabod to feed Abbie more stories from the past. 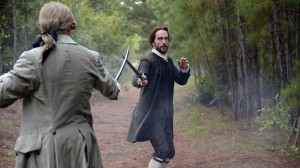 Upon learning about why Katrina had left him, Abraham, furious with resentment, compels Ichabod to get in a combat with him. The two men battle with swords but no one actually gets hurt until a hessian comes and shoots Abraham, who was too full of pride to take Ichabod’s assistance. So, Ichabod was forced to get out of there alone, leaving Abraham to be taken away by the hessians. Abbie asks Ichabod to calm his nerves as he clearly did strike one a while back when the horseman brought up his old friend. Ichabod screams, “I’m in control!” evidently suggesting the contrary. 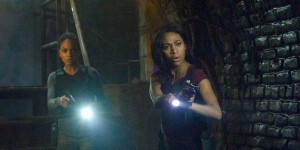 Irving and Jenny enter the cell and Abbie is amazed to see that the Captain brought her sister there, eventhough it was her first day out of the psychiatric institution. But Jenny has some answers, none of the rest do. She says that they couldn’t find the ancient artifact they were searching for but the hessians who have it will have to come into the cell with it and chant it in order to lift the hex over the place, setting the horseman free. Irving suggests bringing backup but the idea is immediately dismissed by the rest as they do not have a clue as to who they can trust anymore. 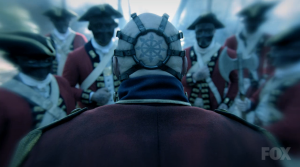 Andy takes an antique relic out of his flesh and summons the minions of Moloch. Soon there are evil, faceless creatures creeping all over the place. While Irving, Jenny and Abbie are fighting the minions, Ichabod has to face the horseman who has now broken free form the chains holding him. 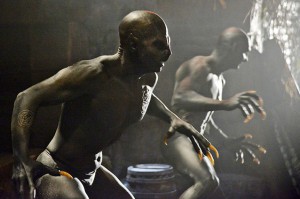 The headless man gives Ichabod a sword to fight with him and pins him on the ground using the exact moves, once applied by Abraham. Ichabod recognizes his old friend, who narrates the rest of the story with Andy’s assistance. When Abraham was dying, Moloch came to him and gave him the power of becoming one of the horsemen and the ability of taking revenge. Abraham tells Ichabod that Katrina was held captive as a trophy for the horseman. No sooner, Andy yells that ‘the master’ prohibited the horseman from killing Ichabod. At the very moment, the minions appear and vanish, taking the horseman and Andy along. Andy asks for Abbie’s forgiveness before he disappears.

Abbie and Ichabod go over their day and Ichabod ponders over the reason behind Moloch’s decision of sparing his life. It seemed as though Ichabod was kept reserved for another evil, which is yet to reveal itself. Ichabod mentions that their benefit was that they now knew what the horseman’s weakness was and it being Katrina, they needed her more than ever now. 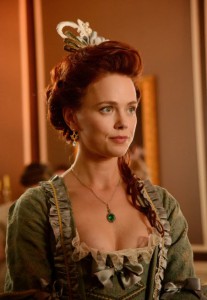