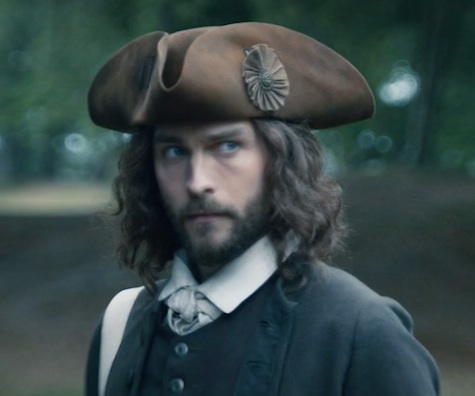 To slip into character as Ichabod Crane on FOX’s Sleepy Hollow, Tom Mison has a secret ritual he tells us about exclusively.

Tom Mison exclusively reveals his rituals before we behold him transform to his character Ichabod Crane FOX’s Sleepy Hollow. “No one in the world knows this,” Mison says, dropping his voice a bit low, “I have a little Sleepy Hollow playlist on a day when the wig and coat are not enough, and that playlist helps a lot.”

Mison usually listens to Tom Waits who screams yet his voice is distinct from grave. Mison expresses how he admired him, “I am a huge fan. I have been lobbying the producers when we reveal the third apocalypse, ‘please can we have Tom Waits?” other artists are also in his playlist like the French singer Woodkid, and Depeche Mode’s “Personal Jesus.”

During the humid break in Wilmington, North Carolina setting, Mison was cornered with some interesting hypothetical and non-hypothetical inquiries.

When asked to choose among the magazines in a rack, Mison answered, “A satirical news magazine called Private Eye in London. I subscribe. It is delivered to Wilmington. I would go for one full of food pornography — anything with a good pie on the front. Then one of the film magazines, and sneer at the other actors.”

“If your TV carried just three shows or networks, what would they be?” asked the Channel Guide Magazine. Tom responded without any hesitation that he would go for Game of Thrones, The Walking Dead and The Great British Bake Off.

Mison is asked to describe an incident when he was startrucked. This is what he said about it, “I was shooting a TV show in Oxford. I was walking around Oxford and bumped into Thom Yorke of Radiohead. I am such a huge nerd that no words could come out of my mouth to apologize for bumping into him. I went into a coffee shop and saw someone from the costume department. He was devastated because he had just had his wallet stolen. And I was trying to be supportive, but I had just seen Thom Yorke”

Another interesting question asked by the magazine was, “What are three things you have to have in your fridge or pantry?” Mison’s recent discoveries were epic. “I have just discovered – and it is rather boring, but could change the lives of your readership — how much you can do with coconut oil. I cook breakfast. You can cook up fries in coconut oil,” he says. “Oil pulling — you swirl coconut oil for abut 20 minutes and it whitens teeth. And enough milk for plenty of tea because I am a terrible English stereotype. The third is I go through so many watermelons. Something I have discovered in the South is the beauty of watermelons,” he added.