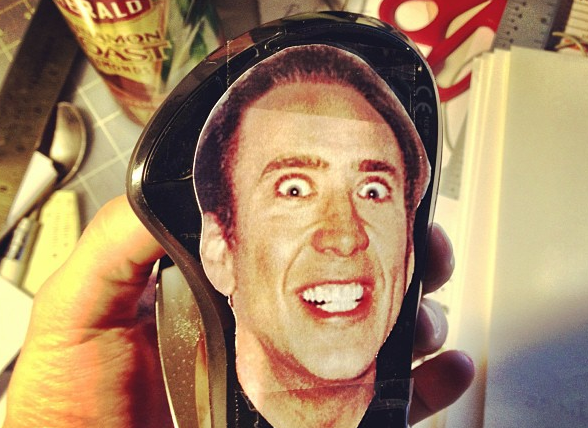 So far there are two horsemen. One is the Headless Horseman, who without a head is still some guy on a horse with a green screen mask on. The 2nd one is Henry Parish or Jeremy Crane, son of Ichabod and Katrina, and is played by the very talented John Noble. Since we don’t have a familiar face on top of the Headless Horseman’s shoulders, we still need 3 more actors or actresses to fill up the positions.

On PaleyFest, one of the audience members asked the cast and crew about who they’d like to see portray the remaining horsemen. The Walking Dead’s Norman Reedus, Luther’s Idris Elba, and film actors Tilda Swinton, Javier Bardiem, and Clint Eastwood were named as dream horsemen. These are good suggestions, but we can do better than that right? So here are my ideas for actors who might be good Sleepy Hollow horsemen.

There is a whole debate on the internet whether Nicolas Cage is an excellent actor or just an overpaid clown. Personally, when the Cagester makes a good movie, he’s really good, and it overshadows all of his bad film and acting choices. Simply put, I consider him a brilliant actor especially if you watch him on films like Leaving Las Vegas, Adaptation, Face-off, and even Kick-Ass. Just don’t bother watching The Wicker Man and Season of the Witch.

Why he’s a good horseman? Because He was awesome in Ghost Rider. They can swap the bike with a flaming horse and he can keep the get up.

Michael Shannon is best known as Nelson Van Alden on the critically acclaimed HBO show Boardwalk Empire. You may also remember him as General Zod in the latest Superman movie Man of Steel. Shannon is a great actor, proof of that is his best supporting actor nomination for the movie Revolutionary Road. He also makes good choices in movies to join like Take Shelter and The Iceman.

Why he would make a great horseman? Because Shannon looks creepy. Very, very creepy. And I think he knows that because he uses that innate creepiness to fuel his acting. I can also sense a murderous intent whenever I see him, so I better stop saying weird things about him right now.

If I could choose a woman to play a horseman, Lily Rabe would be an amazing choice. I’m a fan of American Horror Story and I could confidently say that her acting is on par with that of Jessica Lange and Sarah Paulson. Seriously, her acting chops are really great. She can be a good nun for one second and turn into a demon from hell the next moment. Her acting is so good that she has become really in-demand these days. She’s doing a movie with Jessica Alba called The Veil, and a pilot episode from Amblin Entertainment title The Visitors.

Why she would make a great horseman/horsewoman? Aside from her acting chops, it wouldn’t be that bad if we see a sexy and beautiful lady riding a horse right?

What I Hope to See on American Horror Story Freak Show