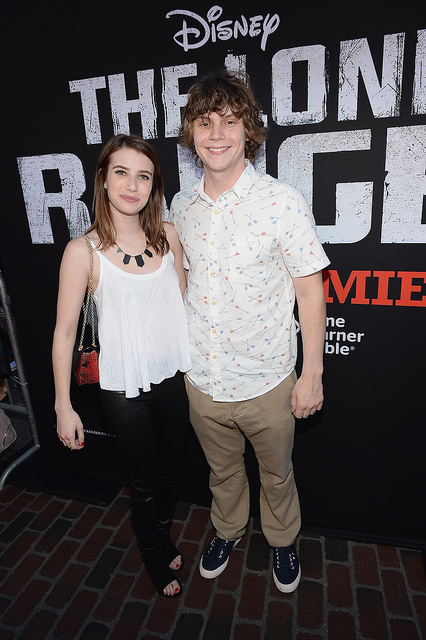 The actor and actress sat down with the rest of the American Horror Story cast for their press panel during the day. They dipped on the upcoming season, before heading to Twentieth Century Fox Television’s Comic-Con Stars & Producers Cocktail Party at San Diego, California’s Pizzeria Mozza.

American Horror Story: Freakshow is the new season of AHS. Emma and Evan will be returning to screens this autumn in their hit series.  Setting will be taking place in the 1950s in Jupiter, Florida, with Jessica Lange starring as a German ex-pat who manages one of the last freak shows in the United States. “We try and do the opposite of what we’ve done before,” Murphy said in the interview. “Jessica Lange has already started practicing her German accent, so I’m very excited!” The cast will be captivating on new characters. Maggie will be characterized by Emma, and the star exposed that this character won’t be a villain like her previous character Madison.

In the glamorous world of red carpets, repeating outfits is seen as the ultimate fashion faux pas. The 23-year-old Emma Roberts was mindful of that philosophy. She was stunning in her nautical-style top, featuring black and white horizontal stripes. She tucked her floaty top into an elegant black pencil cut skirt. The stocky gold necklace made a good overall statement, finishing off her look with pink strappy peep-toe heels.

While Evan decided for a casual look in a printed white t-shirt under a blue button-down.

Emma and her partner of two years were in big smiles as they mingled with industry marvels at the said blissful party. They made everyone envy their “so in love” look as they work the room.

The brunette goddess flaunted her toned abs in her striking outfit accessorized with black leather clutch in her hand, perfect with her red lipstick. This is a familiar look of her aunt Julia Roberts who is of equal beauty.

Emma and Evan will be returning to screens this autumn as their hit series rated 8.4 in the IMDB.

In May, creator Ryan Murphy dropped some light on the upcoming season, which is set to debut in October.

‘I just love it. It feels really right. I thought it was going to be light but it’s turning out to be quite terrifyingly dark, which it feels much more like the Asylum season,’ he told Entertainment Weekly.

‘But look — if you have a character named the Clown Killer, it’s going to be dark.’

“This season will be very different”, claimed the president of FX.  According to him during the network’s Summer TCA showcase, “It’s going to have a really different look and design and cinematography standpoint than any of the previous incarnations”.