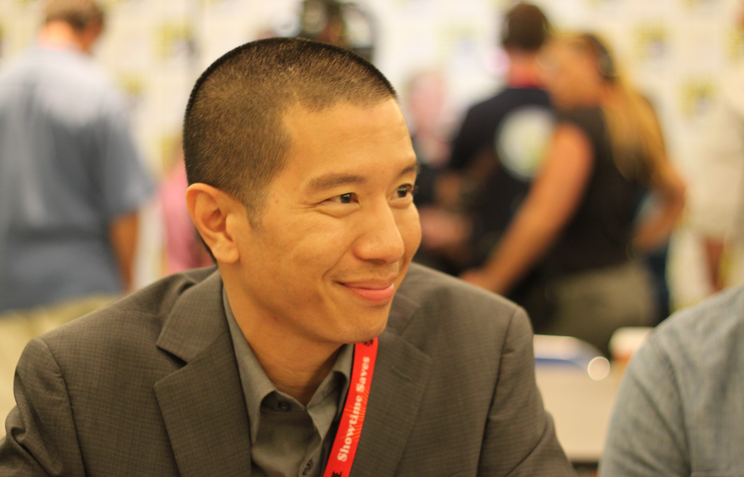 Reggie Lee has been floating around the world of entertainment for quite some time now. He kind of gets type cast a lot as a threatening Yakuza or part of a Chinese triad. He also plays a lot of roles where he’s an asshole that wears a suit and works for the government. For Grimm, he’s still a bit of an asshole, but an asshole with sarcasm and wit. Lee is truly excellent in portraying his character Sergeant Wu especially at times when the show feels so heavy then Wu just breaks the ice.

Mr. Lee shared some of his insights on his character and what’s happening on Grimm season 3.

“Correct. We are currently filming episode 17 of season 3. I think season 3 just started with you guys in the UK, hasn’t it? It’s fantastic. I follow all the fans on Twitter and they’ve been really excited; they’ve been waiting for it. Their response has been great! I remember that from Prison Break too; there are crazy fans over there!”

“As the season moves on, characters start to form a little more, and you see the formation of this sort of gang of people who start working together in order to solve crime and help Nick out – except for Wu!

It’s funny I’ve had so many responses from people, saying ‘he needs to find out’; well this will be the season Wu sees something for the first time, and it affects him differently to everyone else. They way they’ve created it, it’s akin to his culture. It’s a fairy tale. The writers asked me if I knew any Filipino or Chinese fairy tales, and I said I knew a slew. Especially in island countries there’s all this folklore; people have very little to do in the village area, so they create these things. So [the writers] ended up using one of them to facilitate me seeing something for the first time. I can’t give it away, but it will definitely affect him for the episodes after that, and possibly for the rest of the season. “

We know that the role was written for you, so are you really the real life Wu?

“Well I don’t fancy myself as a very sarcastic person in real life. I always wonder at people who have such quick wit, and I wish I could be like that so this is my opportunity! They did write it for me, and I don’t know where they wanted to go with it, but I am literally playing off of one line which was in the pilot. It was written way before I accepted the role… so I started to create the character like that, and I started looking at people who are sarcastic, researching why, insecurities and all that stuff. I started working my way into the character and it was so much fun.

It lightens up the show a bit, because it can get a bit heavy and scary, so they need those moments of light, which I’m happy to provide.

You’ll also see one episode in particular that was written by Brenna Kouf, [show co-creator] Jim Kouf’s daughter, you’ll see, finally, the layers beneath the sarcasm.”

Grimm fans are passionate about the show, how do you feel about it?

We were at the Monte Carlo Television Festival last year and there’s nothing like European fans. They’re so wonderfully rabid. I feel the love.”