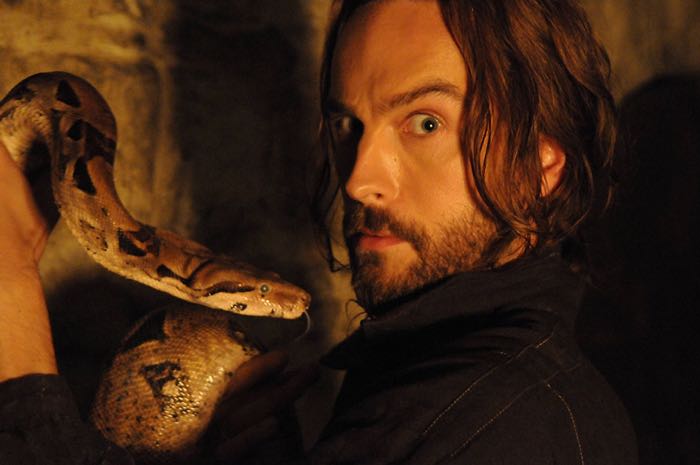 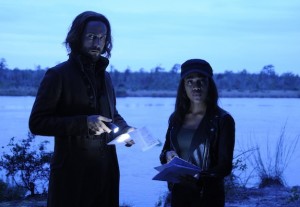 Ichabod and Abbie are trying out different methods to get ahead in their research with the journal. It’s been a while but there is nothing useful they can find in it. Amidst their discussions there is a sudden interruption of Ichabod’s wife, Katrina. She has used her witchy trick again and appeared from inside the mirror in their room. She mentions that she failed her mission to destroy Moloch and that the kid (Moloch) is growing up so fast that he will be able to take down the world in a matter of two days. Ichabod asks for her insights on the weapon they are failing to find in the journal which is likely to help them fight Moloch but Katrina has to run as she hears footsteps of Parish. When Parish enters the room, he knows what was going on and as soon as he touches the mirror, he is able to get through and eavesdrop on what the witnesses are up to.  Ichabod cracks the code. 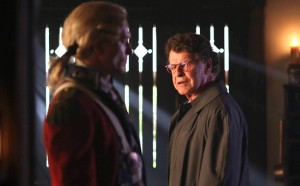 The term ‘chosen words’ in the journal is apparently an anagram for ‘Enock’s Sword’ which is a mythical sword which can kill demons. This can be used by the witness to destroy Moloch and they are able to locate it using a drawing made by Ben Franklin.

Ichabod and Abbie finally have a break through with the journal and as they do, their entire plan is overheard by Henry who then assigns headless the mission to fetch the sword before the witnesses can get their hands on it. When the witnesses reach the spot holding the sword, they find out that headless is going for the sword before they can. Abbie is almost under attack by headless when Ichabod stalls him until the sun comes up and the horseman has no other option but to run for his life. Ichabod and Abbie find a secret passage that leads them directly to a place filled with statues of people turned to stones. 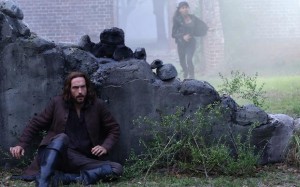 The witnesses run out of there, chased by a monster that can turn people to stone when one meets his gaze. The witnesses realize that they were unable to defeat it without external help and the one man they can think of which can avoid eye contact with the monster is the headless horseman; no eyes, no eye contact. So the witnesses lure the horseman of death into the passage and as expected, the horseman decapitates the new monster. Abbie is to pick from a number of swords and determine which one is the demon destroying weapon. She makes her choice and turns out, none of the swords were real, they all turn into snakes in a heartbeat. Abraham and Ichabod engage in a sword/axe fight but when Abraham finds out that the witnesses were unable to find the sword, he says he would rather watch Ichabod fail and burn in hell till eternity, rather than kill him now. 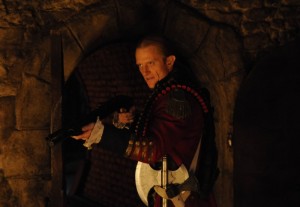 The headless horseman leaves at the sound of the trumpet which is a sign of the starting of the war. Ichabod and Abbie ponder harder and they discover a way which leads to the sword they initially came in search of. Ichabod pulls it out and as they are swear on preventing Moloch from rising, the horseman and Moloch are together prepared to rain hell on earth.

Amidst all this, Jenny was driving Irving, with the intention of shipping him off to Canada. However, the search party set out for Irving was spreading like wildfire and he was forced to jump off the car as Jenny drove past the checkpoints, agreeing to meet him in a pre-decided location. After waiting all night, Jenny receives a text on her cell, which turns out to be an apology from Irving, who has decided to flee and find his destination by himself. Is this the wisest decision he could have made? Guess we will find out in the upcoming episodes of Sleepy Hollow.