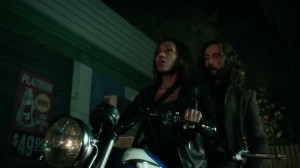 In the previous episode, we saw that Henry had blown the trumpet as a sign of the beginning of the end of days while on the other hand, the witnesses had, in their possession, a sword, a unique weapon which could destroy Moloch. In this episode, we find the witnesses trying to rush over to stop Moloch’s attempts but their car breaks down and they are compelled to ride a motorcycle instead. When they reach, Ichabod jumps out of the bike and insists that he needed one of those as soon as they are done here. The comic relief is reassuring. When they go inside the house, it’s missing the residents but they do manage to find a model of the town of Sleepy Hollow, with marking in places where Henry struck. Upon closer observation, the witnesses realize that the markings collectively make a pentagram sign over town. 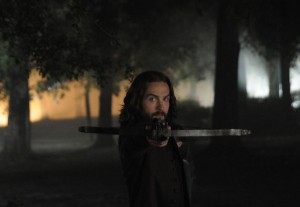 The sign of evil over town is definitely not the best symptom. But more importantly, Katrina is now at the verge of getting decapitated  by her former beau.

Ichabod and Abraham have a sword fight while Abbie frees Katrina from the chains. Ichabod definitely shows better sword-fight skills and has Abraham under his command. Katrina extends the influence of her necklace which makes it possible for the witnesses to see him. When Ichabod tries to scare the horseman of death with the sword with infinite power, Abraham mentions that the magical sword required a sacrifice. The person using will die upon the attack he makes. Ichabod is thinks he is bluffing but Katrina intervenes saying that Abraham might be correct. The witnesses request Jenny to dig up on this issue and she appears with evidence that the sword would indeed kill the one who used it. While the witnesses are arguing over whether or not Ichabod will be able to draw the sword on his son if the situation demanded for it, 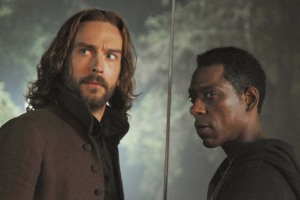 Jenny comes up with a pitch that the sword could not demand the soul of someone whose soul had already been demanded, thus, suggesting that Irving goes along with the process. Abbie retaliates but quickly realizes that they were indeed out of options.

Ichabod goes to the cell holding the horseman of death and finds Katrina chatting upto him. Katrina is trying to gain his trust, again. At one point she tells him that she cares about him and this ticks Ichabod off, who had been listening all along. He avoids the erupting feeling on envy and asks her whether Irving was a good candidate for usage of the sword and Katrina is affirmative that once a soul is taken, it cannot be reclaimed by another. 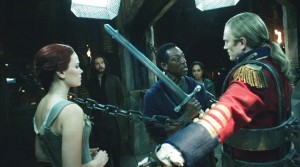 Ichabod then asks her whether Katrina could kill Henry in the journey to destroying Moloch and she definitely shows aversion to the proposal and feeds Ichabod the thought that their son will be free from Moloch’s influence once they have successfully destroyed the devil.

When they are able to track down Irving, Jenny and Ichabod head to get his help and update him on the latest happenings. Jenny swears to look after Irving’s family and he heads off to make his first swing on headless. They try to get information out of the horseman of death and he reveals that the demons are entering earth and they are trying to merge the purgatory and the earth. Each of the trees will fall, the final one leading to the beginning of the end of days. Just when Irving is prepared to kill headless, Katrina intervenes, again. 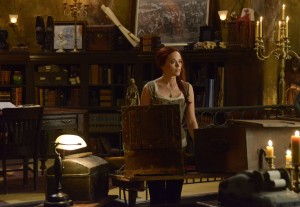 She says that the horseman might be of more use later and Ichabod spares his life for now.

The witnesses gather weapons from Nick and assign him the duty of watching headless while they are gone to fight Moloch and his army. Katrina charms their weapons so that they same some supernatural qualities in them, the Cranes couple get to discussing their issue, looks like they have picked the wrong time to do so. Katrina says that if he cannot trust her then they better just be soldiers at war and no more. So we are guessing this is the old fashioned way of saying ‘we are done’. Are they really? Well, we certainly hope not.

Henry and Moloch are hard at work to raise as many demons. When the witnesses, Jenny, Katrina and Irving try to reach Moloch, they are attacked by an army of demonic creatures. Abbie is shot at the very beginning of the fight, funny, she would be the last person I would except to become a fallen soldier. 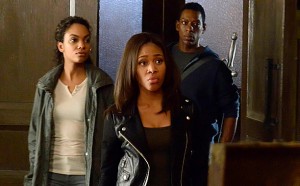 The horseman of war comes to stop them and in a sword fight with Irving, he loses which has a direct impact on Henry as he controls the horseman with his soul. However, before the former captain took the horseman down, he gets severely injured and eventually dies in the battlefield. The remaining four fighters decide to go one at a time and have their shot at Moloch. On the other hand, Moloch sends Henry to delay the arrival of the witnesses and Henry retaliates saying he is vulnerable without his armor. However, Henry soon realizes that now he is disposable to Moloch. Abbie, Jenny, Katrina and Ichabod are visited by Henry and he forces upon them the option to either kill him or stay stuck in the room, letting Moloch do his thing. Ichabod holds the sword against Henry and insists on letting him take down Moloch while allowing Henry to be free for good. He plays along for a bit but eventually ends up being the deceiving nasty man he has always been and snatches the sword for Ichabod. 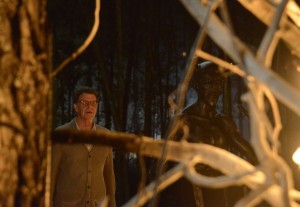 Moloch gets each of Ichabod, Abbie, Katrina and Jenny tied to a separate white tree. Moloch then commands Henry to kill his mother, Katrina, first. Henry tries to explain that Katrina was a prize for Abraham and was to be spared for his sake but Moloch states that the horseman of death had failed him and is now worthless to the demon. Henry abides by walking towards Katrina with the sword in hand when Ichabod interrupts, and asked to be the first to be sacrificed. Henry walks up to his father and just as we think he is going to wave the sword, well he does, but not to kill Ichabod, but to destroy his other father. That’s right. Henry drives the sword across Moloch’s torso. Well, we did not see that one coming. But something tells we haven’t seen the end of demonic influence on the show just yet.