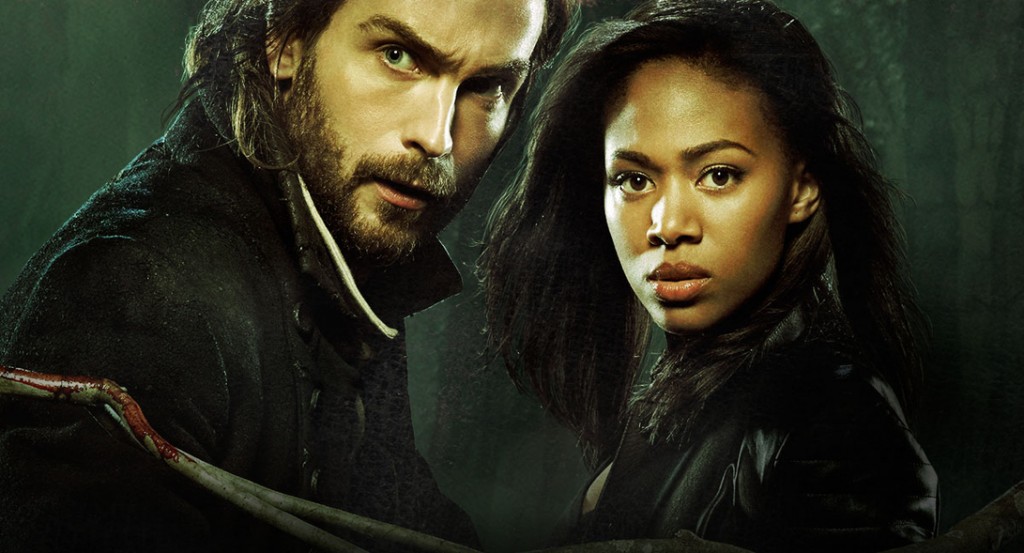 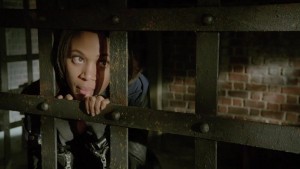 As Katrina takes herself back to the 19th century and accidently drags down Abbie Mills with her, we are taken back centuries, where Ichabod was still in his era and had never met Abbie Mills. Right after landing in the 19th century, Abbie is held captive and mentions that she had valuable information about the hessian soldier Ichabod was looking for but would talk to no except Ichabod Crane.  Ichabod inquires and Abbie tries to leverage her freedom for  information she had. After mentioning that the horseman wasn’t working alone and that he had help form a witch, she has Ichabod’s interest. 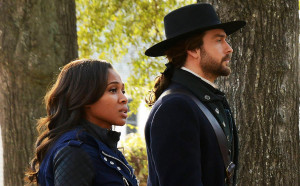 Katrina learns that Ichabod had dodged the attack of the horseman because he was called away by Abbie. In the meanwhile, Abbie tries to explain to Ichabod that she was from the future. She talks about the mission Washington had planned for him. Ichabod’s superior, the colonel, is not happy about Abbie causing the distractions but lets Ichabod have are around for limited period. Abbie tries to tell him stories from the future and then tells the personal stories Ichabod had told her before to earn his trust. She suddenly realizes that whenever they needed help, they turned to books written by historical figures but now the figures were not historical, they were right there in the present. Icahbod mentions that Washington and Jefferson were outside the state, so they move over to their last remaining option, 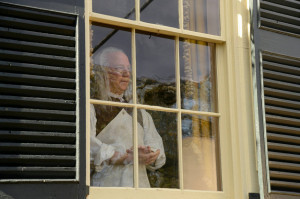 Benjamin Franklin. Unlike Ichabod, Franklin has no problem believing that Abbie is from the future; in fact he is absolutely elated by her presence. Franklin says that they will now have to go to Fredrick’s Manor, to Grace Dixon, where they can learn how to reverse the spell. But before they can take off, the horseman attacks and decapitates Ben Franklin. Abbie and  Ichabod get out of there alive but Abbie no longer has her partner’s support. Abbie finally reveals that Katrina was the witch who wants Ichabod dead and also that she was pregnant with his child. Ichabod is even more agitated by this new stream of information and Abbie suddenly remembers that her phone which the soldiers confiscated, had images and videos of the witnesses together. She tells him to take look at them and mentions that the password is his birthday. In such a crucial point no one has time to stress over the fact that the lock to Abbie’s phone opens with Ichabod’s birthday. Good sign for the Ichabbie shippers, maybe? 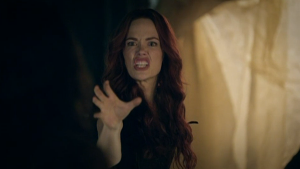 Katrina goes to Abraham, now in the form of the horseman of death, with a head, and lets him know that she was now rooting against Ichabod.  When Ichabod comes home, he finds raspberry, sage and other things that women bearing children use. When he asks Katrina, she says the ingredients were for a woman living next door. Katrina attempts to stab Ichabod on the back but in the nick of time, some soldiers come over and ask Ichabod to attend to General Washington. Before leaving, Ichabod notices the spells in the grimoire and realizes Katrina, after all, was a witch.

Ichabod takes a look at the phone and after struggling a little, manages to get it unlocked. Abbie on the other hand is forced to battle off the colonel who attacks her in the cell. After viewing the videos, where Ichabod is learning the concept of selfies, he finds it much easier to trust Abbie. He goes back to the cell and finds the colonel on the ground, courtesy of Abbie Mills. Together, the witnesses go to Grace Dixon. 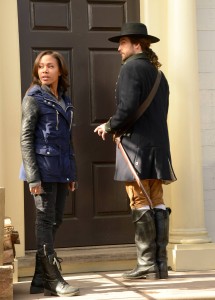 They ask Grace to help reverse the travellers’ spell and she also believes Abbei is from the future and knows about the witness. She said she has to draw power from the spell protecting the house and thus the house will be vulnerable to attack.

Katrina uses Abbie residual blood on the colonel’s wound to track the witnesses down and then kills him. Without much surprise, Katrina and the horseman both arrive at the manor to attack the witnesses. Grace needed Abbie to perform the spell so Ichabod runs out to stop them. Just as the horseman is about to decapitate Ichabod, Abbie finishes the spell and they are all brought back to the present. Katrina, outraged, attacks Abbie and trying to save her, Ichabod stabs Katrina with a knife. Katrina dies and unites with her son.

Irving is back and we learn that Henry’s death released his soul. Surprisingly, no one seems much affected by the fact that Katrina was dead. Ichabod sheds a few tears and they calmly watches as her body vanishes in thin air. Isn’t he supposed to be a little more devastated? Or is he just used to being without his wife, considering she has been in the purgatory in majority of the time on the show. As a final remark, Abbie mentions that Grace her the war is not over and that the most crucial battles are still ahead of them. This is why they are still here.