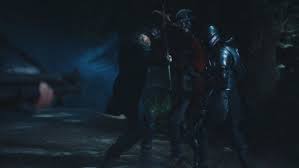 Sleepy Hollow still brings the pleasure and tension in its second season. Here’s the review of The Kindred.

We’ve noted one of Ichabod’s nightmares in progress at the beginning of this week’s episode of Sleepy Hollow. Ichabod Crane dwells in so many layers of reality, whether it’s Purgatory or in the past and he knows well where he stands. At this point, it’s no surprise when he wakes up from any climactic moment, but scenes like this with Katrina as damsel-in-distress about to be whacked by the Headless Horseman are like a tormenting dessert before the course meal begins.

It seems that Benjamin Franklin once created a monster who, according to the apocryphal book of Tchacos, would be the only worthy opponent for the Headless Horseman. This monster, the Kindred, is composed of only the best, strongest body parts (shown in a flashback being sewn together by Franklin) in order to house the spirit of death itself. Unfortunately, the Kindred was abandoned back then because it lacked one key component, a body part from the Horseman which is no longer lacking.

The question of whether to go through with completing and raising the Kindred works well as a moral dilemma for the team. On the one hand, as Ichabod believes, completing the Kindred would provide the strongest weapon yet against the Horseman, and it’s not like they have that many options knowing that this creature would contain the spirit of death itself, and thus be indeterminately dangerous, Abbie has strong reservations. This is a revealing debate, one that re-emphasizes Abbie’s principled rationality and Ichabod’s desperate determination, as well as their profound mutual respect.

The Kindred is a monster that was created to fight another monster, which Abbie graciously pointed out. So they raised the Kindred from his earthly slumber, and the Kindred battled Steve and Henry’s SuperSuit while Ichabod attempted to rescue Katrina before the Horseman could sanctify their bond by beheading Katrina. Then the Kindred saved Abbie after it realized she was in some sort of danger.

Will he disappear only to return when danger is near? Is he gone forever (not likely since his skull is the Horseman’s skull)? Will he become a sentient being and decide his fighting days are behind him and get a job at that diner we saw in the pilot but never visited again? It’s anyone’s guess, but I look forward to seeing where this leads.

The Kindred set things in motion after the premiere served mostly to rescue Abbie and Ichabod from the predicaments they found themselves in at the end of the Season 1 finale. We met the Kindred and the new sheriff, Jenny was arrested, Irving possibly sold his soul, and Katrina decided to stay put as a prisoner of the Horseman. That’s a lot of material for 45 minutes, and yet the episode never felt busy or overstuffed. But it’s also a lot of balls up in the air at once, I wouldn’t want to spoil it and say they’re probably coming down at once, meanwhile, let me enjoy this ride.