American Horror Story to Have a Killer Clown 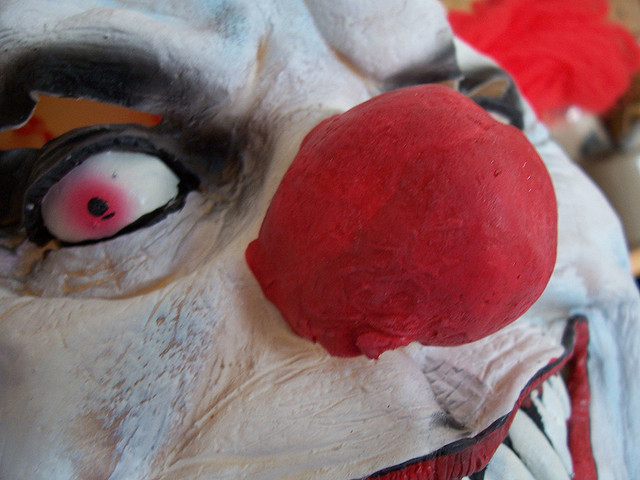 If you ever wondered if American Horror Story could get any creepier then wonder no more. The hit FX show will feature a killer clown, so if you’re a Coulrophobic, meaning a person who is afraid of dudes wearing silly make up and funny costumes, then I’m afraid to say the fourth season of AHS is not for you.

Entertainment Weekly got the first confirmation from co-creator Ryan Murphy himself:

“It was always a concept that Jessica and I talked about really early on,” says Murphy of Freak Show. “It was always her favorite one, which I thought was funny. I’ve had many different versions that I’ve run by her. I just love it. It feels really right. I thought it was going to be light but it’s turning out to be quite terrifyingly dark, which it feels much more like the Asylum season. But look — if you have a character named the Clown Killer, it’s going to be dark.”

When asked further if the clown is a scary clown Murphy replies “Yes. The most terrifying clown ever!” He was also asked if they will also be doing the familiar side show character the bearded lady. “Yes. Our version of it.” Says Murphy.

So there’s going to be a bearded lady and a Killer Clown. I have to say that these two are both fine starting members of a freak show group. I believe that a sword swallower will also be included and probably a fire eater. A freak that walks on glass and lies on a bed of nails would also be a great addition.

One point that I would also want to discuss concerning Murphy’s statement is the part of “. I thought it was going to be light but it’s turning out to be quite terrifyingly dark, which it feels much more like the Asylum season.” This is a major concern for me because I consider Asylum to be the best season of AHS so far. Coven was really entertaining and attention grabbing but a lot of diehard fans of the show commented that it was a bit too light.

Previously, Murphy and some of the casts stated that they will be continuing Coven’s light comedic tone. Although the comedic tone was highly appreciated by a comedy fan such as me (Gabourey Sidibe twirling was really fun) I have to say that the essence of American Horror Story is lost when they go to a light direction. I also said in one of my posts that Freak Show has a huge potential to be the best season of American Horror Story as long as they make it as scary as Murder House and ambitious as Asylum.

Anyway, Freak Show is really shaping up to be an excellent and scary season. We may have to wait a few months more because it has been confirmed that the horror anthology will not be appearing on our screens until later this year. Somewhere, out there, a coulrophobe just said “That’s fine by me.”