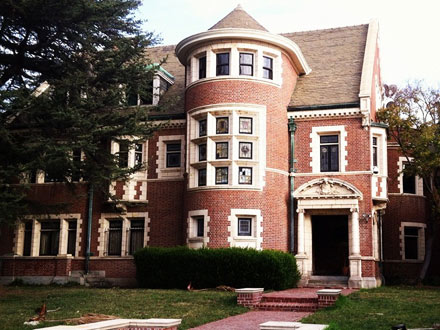 The American Horror Story house has been finally sold for $3.2 million. Before this Rosenheim Mansion became an American Horror Story star, it was just another cool, old and luxurious house for sale. It has been on and off the market since 1999.  Back in 2011, the listing price for the Tudor-style house in L.A.’s Arlington Heights was $4.5 million and there were no takers back then. But after being used for the hit show, American Horror Story’s first season, its listing went up to $17 million. The public opposed to this price and pricecuts were made. It was last listed at $7.8 million but was finally sold for $3.2 million earlier this month according to Curbed.

The mansion has gained fame when it was used as the setting for the first season of American Horror Story, but its legend in film and television history, which dates back nearly a century, has not always been so ominous. Possessing its gothic design and a floor plan structured for entertaining on a grand scale, the Rosenheim estate has long appealed the eye of Hollywood producers. Some of the film credits of the landmark home’s filmography includes 1950’s Frank Sinatra film “Old Blue Eyes,” “Spider-Man” (2002) and “Seabiscuit” (2003). “Buffy the Vampire Slayer,” “Dexter,” “Miami Vice” and “The X-Files” are among its television credits

According to PropertyShark, the buyers were: actress, Angela Oakenfold, who was the former wife of the electronica DJ that had won the Most Successful DJ title in the world title in the 1999 Guinness Book of World Records and a doctor who has been listed as her domestic partner. According to real estate agent, Stephen Apelian, he buyers have a load full or work ahead of them. The mansion is in need of a new roof and some have heavy electrical and plumbing fixing and also other “deferred maintenance” type updates. Stephen Apelian both represented the seller and the buyers.

The architect of the mansion, Alfred Rosenheim moved to Los Angeles to work on the Hellman Building in Downtown’s Historic Core. Around 1908, he built this house for himself. The designated LA Historic-Cultural Monument displays different sorts of Tiffany elements—stained glass windows, lighting fixtures, “a museum-quality set of Tiffany glass doors”—six Batchelder tile fireplaces, a detached ballroom, and a solarium.

Description of the said mansion according to sources are as follows: Amid the 10,000 or so square feet of nooks and crannies are Tiffany stained-glass windows, period light fixtures, Peruvian mahogany paneling, a billiards room, a sunroom, six Batchelder tile fireplaces, six bedrooms and five bathrooms. A chapel has 56-foot-tall ceilings. Just for good measure, there’s a hidden room in the basement, a gym and a recording studio. White paint in the interiors appears to have exorcised many of the demons from earlier listing incarnations.