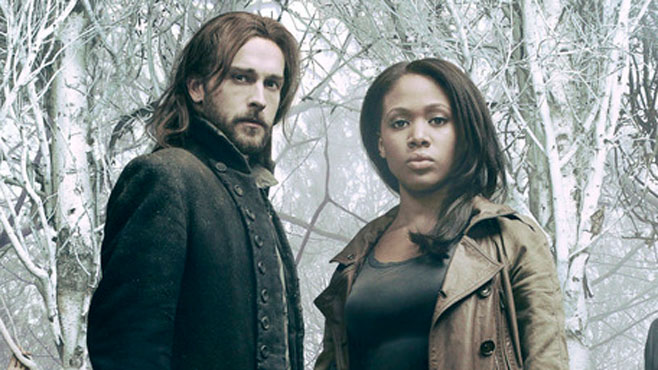 The first season finale of Sleepy Hollow undoubtedly kept us wanting more. The biggest reason for this is the cliffhanger ending that left all of the major characters on perilous situations. Nicole Beharie, who plays Leftenant Abbie Mills, and Tom Mison who plays Ichabod Crane, gave an interview to Access Hollywood and both promised that the 2nd season of the hit FOX show going to be a lot better.

“We know that they left it for all of the characters on such a high note and all of the writers are determined to have that as the starting point,” Tom said, making a motion with his hand to indicate that the bar is set high. “So it can only build from there, really.”

The starting point of the buildup is quite big. We last saw Ichabod Crane tangled in roots and thrown into his own son’s grave by none other than the owner of the grave himself, Henry Parish aka Jeremy Crane aka the 2nd horseman of the freaking apocalypse. Nicole Beharie’s character on the other hand is still trapped in purgatory. Aside from the leads, Captain Frank Irving and Jenny Mills were also put in not so comfortable situations. Irving was sent away after confessing to the murders of Officer Jones and the Priest while Abbie’s sister Jenny is left on a deadly situation after the headless horseman appeared and shot her off the road.

We all know that all of these plotlines are amazing but at the start of the supernatural show, Beharie was having doubts whether viewers would accept crazy twists that would distance the program from the original story.

“Initially, I think, when the show hit the air, we weren’t sure that people would like get it and follow it and take that leap, but people are with us, and the fans, themselves — we have like really devoted, I think you call them like, ‘superfans,’ ‘fan girls’ that like paint pictures and they follow every second of the show. We’re really lucky,” Nicole said.

“It’s the type of show that we get very talented fans, I think because they’re always having their imagination sparked, so we get lots of pictures and we get fan fiction. Mainly about—” Tom said, pointing at himself and his co-star, Nicole.

Mison, who wears a wig on the show and 18th century clothes, looks very different in real life. In person, the actor looks sharper with modern clothes paired with a contemporary haircut. This makes him unrecognizable by some fans.

“I’ve sat in a pub in North Carolina and there have been two people sitting next to me talking about the show, not having a clue that there was a wigless Ichabod sitting next to them,” he said.