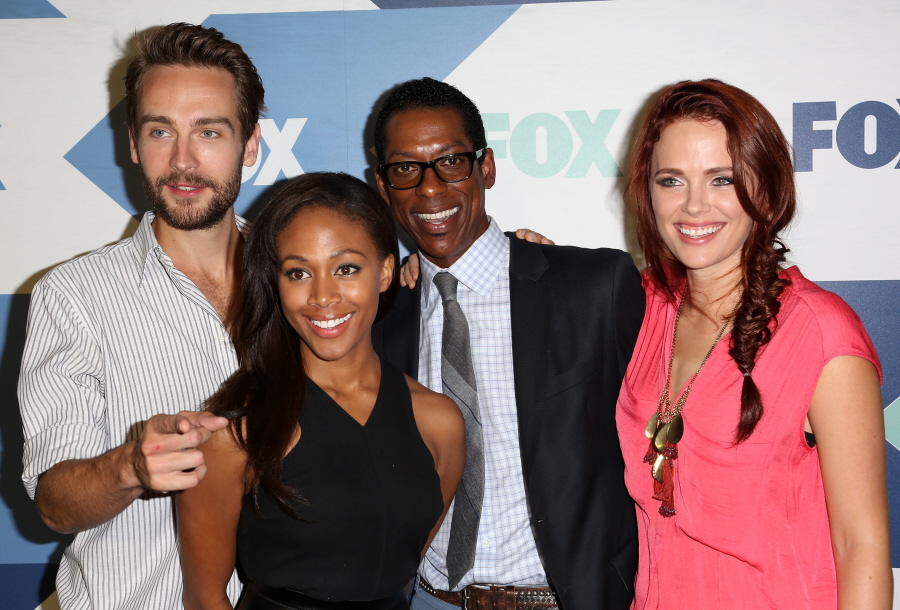 As part of the show’s For Your Consideration campaign, Fox’s Sleepy Hollow held it’s screening on Los Angeles’ Hollywood Forever Cemetery along with headless horsemen on display for different media outlets.

Fans were all ears for the Q&A at the cemetery’s Masonic Lodge. Stars of the supernatural TV series Tom Mison as Ichabod Crane and Nicole Beharie as Abbie Mills were joined by the show’s executive producers as they gladly drop hints about the anticipated sophomore season.

What the Next Season will Unfold

The debonair Tom Mison coyly admitted he could only think of “swear” words when asked to sum up the season-two premiere in three words! To his rescue, Beharie bid one hit, “explosive, and one piece of sound advice,buckle up!”

Mison gave relief to the audience who remained jaw-dropped from season one’s finale with his words of reassurance, “The great thing is, the second season starts exactly at the moment the finale left off, so all of the pace that’s been building up through the last 13 episodes, it’s just straight in. We’re hitting the ground running, so there’s no time for Ichabod or Abbie to sit back and consider what’s happened.”

What’s up for Abbie

Beharie mentioned that the second year will also feature “more family stuff for everyone, and we’ll see where Abbie comes from and why she’s a Witness as well.”

“There’s a big surprise in the premiere that Abbie comes to in Purgatory, and that’s going to play out throughout the entire season. We’re really going to get to understand her past a lot more. We’ll see more of the family dynamic as they try to understand her role as a Witness; what exactly happened to Abbie and her sister, Jenny; how you become a Witness; and what that really means. She takes it very seriously”, Executive producer Mark Goffman said.

The executive producers had nothing but praise for Timothy Busfield who will be portraying Benjamin Franklin for season two. “When we saw him come out in the makeup and the whole getup, it was thrilling to me, he was such a fantastic Franklin,” Len Wiseman enthused. “It was eerie, he really did impress us. We were running around showing the photo to everybody on set.”

Goffman agreed, “We wanted to come up with a Franklin that had never really been portrayed before on television, and this one has a level of irreverence and brilliance and smarts. His relationship with Crane is going to be something that’s memorable and a lot of fun to watch. This is a person who was responsible for so much of the founding of our country and so many inventions that we take for granted; there’s many seasons worth of stories to unwind in how he played a role in the Revolution and his relationship with Crane.”

Speaking of new characters, Matt Barr enters as Nick Hawley a bounty hunter in the troubled town. “He’s doing a five to seven episode arc. We had to open up the town since we’re doing more episodes, and he’s going to be an antiquities dealer who Jenny (Lyndie Greenwood) used to go to for help finding things,” Heather Kadin teased.

On the Pressure from the Success of the First Season

Co- creator Roberto Orci calmly concur, “The pressure for us is just to make sure that the characters continue being authentic. When we’re in the room thinking this stuff up, the characters have taken on a life of their own, partly because of the great cast that we have and all of us collaborating.  He added, “ It’s been very natural, it’s like we’re fans, and when you think of it that way it starts to become less pressure, it’s like, the train is moving, let’s just make sure it doesn’t go off the rails.”