What And Where Does Frank Irving Stand Now?

This article contains spoilers about the latest episode of Sleepy Hollow, Awakening. This week we learned of Henry’s death, which essentially implies the freedom of Irving from the capture of evil. In an earlier interview with Variety, Orlando Jones described his character’s initial demise by stating, “I heard about it not long before we shot it, actually. It’s one of those things where the scripts change often and like any episodic television show, it’s not uncommon to get new pages when you show up to work, so even when you think you know where it’s going, you find out you don’t, and pretty early on, I figured out “there’s no sense in me guessing, here.” I knew with a little advance notice but not a lot, and certainly not that way. I didn’t realize it was going to be with the sword and all of that. It was surprising.” The actor further went on to say, “Whenever you sign up to do this sort of thing, my first obligation is to the character and what I do for a living, so I was really more concerned with… I often believe there’s this emphasis on action sequences, and that’s cool, but that’s not what I respond to as a fan.

I respond to what that character is going through emotionally and how that informs the action, and less the action [itself]. I was just focused on what the sacrifice meant to Irving, given where he’s gone and given where it’s falling in the course of this season. So I was really obsessed about how to make you care, and less about “oh, I’m dying” — whatever with that. [Laughs.] There’s that thing — the 12-year-old boy in me — I remember really well being older than 12 and watching Michael Jordan having to go play basketball after hearing reports that his father had died in this very mysterious death, and then he had the flu, and here he is going into game 7 of the championship, and I just wondered what that must’ve felt like, because his career legacy was going to get judged on whether or not he won that game, but what he had to be going through emotionally, he lost his dad…

There is no denying that the scene with the war was quite an epic one. Orlando Jones went on to describe the scene and said, “I do all my stunts so I feel like it’s an acting thing for me — there’s a way I want things to land and the way I want him to feel about things. I was really focused on just trying to deliver the elements that were most important, and as a fan of the show first and foremost, I really wanted to see more of Irving’s struggle and how that impacted Macey and Cynthia because he made those choices that he made for his family. Amandla Stenberg and Jill Marie Jones are amazing and I hope that they get to come back to the show so we can see how they’re dealing with the trauma of his passing. I was happy that he got a heroic death, because I felt like that was important.

But that’s where I focused, because obviously it’s complicated in the sword work and all that jazz. I love those elements, it was fun to film, because it really is grandiose: he is emotional, he is fighting War who has proven to be a formidable foe, and technically kind of fighting Henry as the operator of War, so it was super personal, and I wanted to make sure it felt very personal and very visceral and not like an action sequence. I wanted you to forget that there was a sword involved at all, so that with each moment of it happening, what you really took in was how much it meant to him.”

Orlando Jones speaks more about the diversity in Sleepy Hollow and about his character by stating, “From the beginning of “Sleepy Hollow,” the co-creators, Alex Kurtzman and Bob Orci and Len Wiseman, have always talked about the amazing diversity and representation on the show, and they also talked about how it wasn’t a conscious choice on their part — they just went with the best actors for specific roles, but the fact that it ended up the way it ended up was very exciting for me. 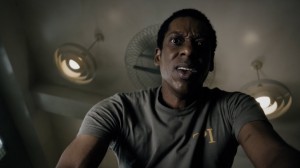 So if you think about the episode where we reveal the true story behind what happened to Abbie and Jenny’s mom, you realize that there’s so much exciting ground to cover with those characters and their backstory, and to learn more about how Abbie became one of the two Witnesses, how we arrived here. I had legit man-tears seeing the interaction between Nicole and Lyndie [Greenwood] and Aunjanue Ellis; I look forward to seeing more of that in the show. And even though Ichabod is obviously a highly evolved man considering the era in which he came from, I look forward to seeing further character development for him that challenges his preconceived notions about the modern world. So if Irving becomes the impetus for us to explore those stories, then as a fan I’m really happy, because I really think that’s an important part of why “Sleepy Hollow” has been relevant as a show in the first place.”